The Old World is a reference to those parts of Earth known to Europeans before the voyages of Christopher Columbus; it includes Europe, Asia and Africa. 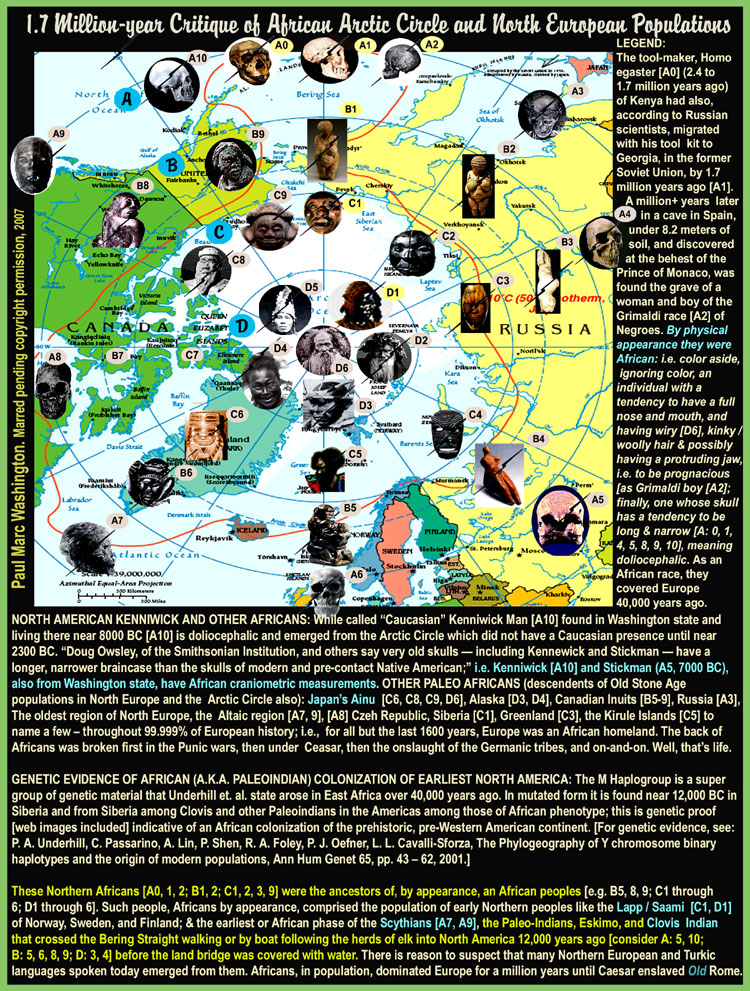 The above text is perhaps a bit small and may be difficult to read. That text appears below in a larger, more readable font size:

The tool-maker, Homo egaster [A0] (2.4 to 1.7 million years ago) of Kenya had also, according to Russian scientists, migrated with his tool kit to Georgia, in the former Soviet Union, by 1.7 million years ago [A1]. A million+ years later in a cave in Spain, under 8.2 meters of soil, and discovered at the behest of the Prince of Monaco, was found the grave of a woman and boy of the Grimaldi race [A2] of Negroes.

By physical appearance they were African: i.e. color aside, ignoring color, an individual with a tendency to have a full nose and mouth, and having wiry [D8], kinky / woolly hair & possibly having a protruding jaw, i.e. to be prognacious [as Grimaldi boy [A2]; finally, one whose skull has a tendency to be long & narrow [A: 0, 1, 4, 5, 9, 10], meaning doliocephalic. As an African race, they covered Europe 40,000 years ago.

NORTH AMERICAN KENNIWICK AND OTHER AFRICANS: While called “Caucasian” Kenniwick Man [A10] found in Washington state and living there near 8000 BC [A10] is doliocephalic and emerged from the Arctic Circle which did not have a Caucasian presence until near 2300 BC. “Doug Owsley, of the Smithsonian Institution, and others say very old skulls — including Kennewick and Stickman — have a longer, narrower braincase than the skulls of modern and pre-contact Native American;” i.e. Kenniwick [A10] and Stickman (A5, 7000 BC), also from Washington state, have African craniometric measurements.

OTHER PALEO AFRICANS (descendents of Old Stone Age populations in North Europe and the Arctic Circle also): Japan’s Ainu [C6, C8, C9, D6], Alaska [D3, D4], Canadian Inuits [B5-9], Russia [A3], The oldest region of North Europe, the Altaic region [A7, 9], Siberia [C1], Greenland [C3], the Kirule Islands [C5] to name a few – throughout 99.999% of European history; i.e., for all but the last 1600 years, Europe was an African homeland. The back of Africans was broken first in the Punic wars, then under Ceasar, then the onslaught of the Germanic tribes assualting the African Celts in England, Gual, Germany , and on-and-on. Well, that’s life.

GENETIC EVIDENCE OF AFRICAN (A.K.A. PALEOINDIAN) COLONIZATION OF EARLIEST NORTH AMERICA: The M Haplogroup is a super group of genetic material that Underhill et. al. state arose in East Africa over 40,000 years ago. In mutated form it is found near 12,000 BC in Siberia and from Siberia among Clovis and other Paleoindians in the Americas among those of African phenotype; this is genetic proof [web images included] indicative of an African colonization of the prehistoric, pre-Western American continent. [For genetic evidence, see: P. A. Underhill, C. Passarino, A. Lin, P. Shen, R. A. Foley, P. J. Oefner, L. L. Cavalli-Sforza, The Phylogeography of Y chromosome binary haplotypes and the origin of modern populations, Ann Hum Genet 65, pp. 43 – 62, 2001.]

These Northern Africans [A0, 1, 2; B1, 2; C1, 2, 3, 9] were the ancestors of, by appearance, an African peoples [e.g. B5, 8, 9; C1 through 6; D1 through 6]. Such people, Africans by appearance, comprised the population of early Northern peoples like the Lapp / Saami [C1, D1] of Norway, Sweden, and Finland; & the earliest or African phase of the Scythians [A7, A9], the Paleo-Indians, Eskimo, and Clovis Indian that crossed the Bering Straight walking or by boat following the herds of elk into North America 12,000 years ago [consider A: 5, 10; B: 5, 6, 8, 9; D: 3, 4] before the land bridge was covered with water. There is reason to suspect that many Northern European and Turkic languages spoken today emerged from them. Africans, in population, dominated Europe for a million years with the real turning point being Ceaser's 54 BC incursion with 600 boats into the African Celt land of England where the onslaught marked the beginning of the end of an African presence in Europe.
Marc Washington
Top

If it were only as clearcut as that...
Top

Aw, what the hell, I figured I'd beat Beags to the punch and put up an essay on Multi-Regionalism.


The Multiregional theory states that the hominid H. erectus. Migrated out of Africa through the north approximately one million years ago and spread throughout the rest of the world. After some time several populations of H. erectus became isolated and each followed a similar path of evolution until they developed into archaic humans. Such small populations have a selective gene pool and although each group may have proceeded to develop different rates they all managed to follow the same evolutionary lines. This theory suggests many possible movements of Homo erectus out of Africa but does not allow for any other movements out of Africa after H. erectus.

The thing that most bothers me about this 'afrocentristic" view boils down to the definition of race. For the sake of argument, let's say OOA is valid. It could be argued we are all African. But at some point we changed and a racial distinction emerged is now being demonstrated in the afrocentrist's view point. So now the claim is implied, that only those who retained or better to say, developed distinct physical features similar to the ones we see in sub-sahara africa today are the only "true" africans, and so it was the ancestors of these racially distinct people who are the originators of much of the worlds culture.

So the point is this, given the validity of OOA which I have aknowledged for the purposes of this post, it can be stated that "white" europeans are in fact, african. So why now must such racial distictions be made? I have yet to understand, what exactly is race other than a cultural distinction?
Top

Skin color aside....there are skeletal differences which are a little harder to explain in my mind.

Of course, that's my mind so take it with a grain of salt.
Something is wrong here. War, disease, death, destruction, hunger, filth, poverty, torture, crime, corruption, and the Ice Capades. Something is definitely wrong. This is not good work. If this is the best God can do, I am not impressed.

Hmmm - so where did Caesar and his troops come from? In your doc at the bottom it says "until Caesar enslaved Old Rome." Also - how did he enslave Rome? Weren't he and his troops from Rome? Maybe I missed something somewhere.
i'm not lookin' for who or what made the earth - just who got me dizzy by makin it spin
Top

Rome was pretty busy at the time enslaving damn near everyone else, though.
Something is wrong here. War, disease, death, destruction, hunger, filth, poverty, torture, crime, corruption, and the Ice Capades. Something is definitely wrong. This is not good work. If this is the best God can do, I am not impressed.

Exactly why I don't understand the statement at the end of his web page doc that Caesar enslaved Old Rome. I don't get it.
i'm not lookin' for who or what made the earth - just who got me dizzy by makin it spin
Top

rich wrote:Exactly why I don't understand the statement at the end of his web page doc that Caesar enslaved Old Rome. I don't get it.

rich wrote:Hmmm - so where did Caesar and his troops come from? In your doc at the bottom it says "until Caesar enslaved Old Rome." Also - how did he enslave Rome? Weren't he and his troops from Rome? Maybe I missed something somewhere.

Er... maybe they were Africans too?