Would anyone know if someone has ever made the suggestion before, that all these round boulders found all over, in Costa Rica, Bosnia, new Zealand,... are actually, in fact, impactites?, from the YDB? [...it just seems like there would have been at least one to make the correct assumption?]
...and- http://www.stltoday.com/news/national/o ... 2e584.html

"...— has been dead for 195 million years. But scientists think a small bit of soft tissue still clings to those old bones..."

OMG!, Please somebody, stop them! this is getting way passed ridiculous! Surely they understand that the truth will eventually be known? [poor Mary Schweitzer]... Could you all bring them 'up to speed" on this research?

...anyway, can someone find the "scientist/s" ["paleontologist"] to first make the determination [brainfart] that dinosaurs may be this old? [gotta be in here somewhere?]- https://en.wikipedia.org/wiki/Dinosaur

"...conventional wisdom about fossilization is that all soft tissue, from blood to brains, decomposes. .."

[...but that would be "conventional" wisdom;-] http://newgeology.us/presentation48.html

"...Since dinosaurs are thought to be over 65 million years old, the news is stunning - and more than some can tolerate. .."

[...even a four year old can...;-] ...and this is where it starts! Teaching an innocent mind nonsense!... https://www.newdinosaurs.com/dinosaur-bones/

"...In 1819 William Buckland found some Megalosaurus bones in a field. By 1824, he had accurately described them scientifically..."

...was it Buckland? Are we still going by some un-"scientific" assumptions made in 1824?! "accurately described"? Did they understand that the Moon had impacted the Earth...? http://www.6000years.org/frame.php?page=home

We are now just at 6,000 years since God created the heavens and the earth

...and then there's the other extreme! ...as if such a bad misinterpretation of the science wasn't enough, the bold mistranslations of our historical accounts makes it that much more worse!... maybe these findings will bring common ground? [...as, I am sure, on both sides, will commonly despise my research!;-]

circumspice - "...all science that precedes him is a malicious lie..."

"science" does not lie! ...and there are only a certain small number who understand the truth and that are purposely misleading the public... I'm sure that most actually [want to?] believe all the mistaken assumptions? ...most won't even further investigate? [...and it all seems so simple, to me...]

-could not care less about being in charge, and that may be one of the problems?

-nope, wrong again, as I do want very much for my research to become common knowledge and to be put in curriculum, I care very little for fame... [fickle]

"...Inside the boulders are numerous cracks, called septaria, which radiate outward from a hollow core filled with crystals.
Their origin is unclear and unexpected locations remain largely unexplained..."

[...so, what sedimentary or man-made process would produce hollow spheres with crystals in the center? ...only an impact could!]

"...They have been also found in China, Israel and in Saint-André-de-Rosans in the Hautes-Alpes, France and Champ Island located in the central area of Franz Josef Land, Russia. Those found at Cape Triest are comparable Moeraki boulders in New Zealand. Other stone balls have been found in the village of Boguchanka in the north of Irkutsk region..."

[...and if you were to map the strewn field along the YDB ejecta blanket, you will find that these stone balls fell in the exact places expected...consider, since Pangaea was intact and the Moon's impact broke it apart, several land masses were in the process of rapid displacement. It appears the new Zealand impactites made landfall first?...as these larger spherules must have circled the globe?...]

so, wuz up? ...are you all going to help correct all this misunderstood science and lost history? ...what'da'ya' say?;-] 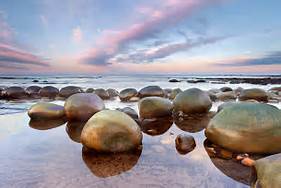 You need to take your meds Tony.
"Damn with faint praise, assent with civil leer, and, without sneering, teach the rest to sneer." ~ Alexander Pope
Top

Wonderful body of alternative facts! An absolute masterpiece of lunacy.